YOU ARE HERE:: Home / The Business of Broadband / WiFi Connections Gone Wild - Is Your Customer’s WiFi on Spring Break?
Previous Next 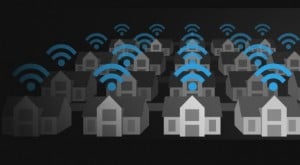 When Wi-Fi technology first started taking off, people were connecting one or two devices to their Wi-Fi network. Today it’s a WiFi party with most households having at least four connected devices and planning to add more. In addition to desktop and laptop computers, smart phones and tablets, there’s a host of new items waiting to access the Internet in both the home and office. With all these devices coming into use it’s no longer obvious what might be a source of interference in your customers’ WiFi network or even if interference is the problem.

Wireless links are now embedded in watches, shoes, MP3 players, and many other tiny consumer devices. Because of the growing dependence on all these devices, Wi-Fi interference has become a major issue in troubleshooting WiFi networks. Research reports 67 percent of all residential Wi-Fi problems are linked to that interference. Technicians troubleshooting WiFi connections for customers say interference is the biggest challenge in managing a Wi-Fi network.

With the right tools in place you can determine if interference is actually the problem when your subscriber’s internet is not performing adequately. If interference is indicated there are a number of things your techs can check to narrow down the source as they troubleshoot a subscriber’s WiFi connection. Let’s take a look at some things to watch for:

Interference Outside the Home
Large satellite dishes, radio towers, and neighbors' wireless networks are among the sources of wireless interference that can originate from outside the home. While there’s not much that can be done about these, changing frequencies to 5 GHz in order to separate from neighbors' 2.4 GHz networks can sometimes clear things up.

The Router is Next to an Electronic Device
Your subscribers will likely have a number of electronic devices and appliances at home. Many of these devices can cause interference for WiFi signals. Everything from TVs to microwaves to refrigerators can cause the strength of the signal to be compromised or obstructed. The problem increases when the router is placed next to the television, microwave, blue tooth speakers or any other electronic device. Sometimes improving the signal is as simple as moving the WiFi router a safe distance from such equipment.

Interference from other electronic devices is not the only problem causing poor WiFi performance. It’s important to know the most favorable positioning of WiFi routers in order to correct mistakes. Incorrect device placement will cause interference that hampers and sometimes blocks the WiFi signal entirely. When troubleshooting, watch out for some of these common placement mistakes that subscriber’s often make:

The home gateway is on the floor
WiFi signals are known to move sideways as well as downwards. So, when a router is placed on the floor you are blocking the way through which the WiFi signal travels throughout the house. If you want to get the best signals from the WiFi router, it should be placed at a certain height, which is at least five to seven feet above the ground level.

The home gateway is hiding
When the router is hidden in a closet, a cabinet or behind a bookshelf, the performance diminishes significantly. This is because a number of household materials are known to block WiFi signals. Walls with plumbing can cause significant interference, and walls with electrical wiring inside can cause some degree of interference. Even humans are known to cause interference in spreading WiFi signals. So, if you find the router is hidden, concrete walls and other hidden construction materials could be causing disturbances to the WiFi signals, and hampering its strength. Instead, the router should be placed in a more open area.

The home gateway is beside water
Your subscriber has a fish tank on a table in his house. He’s placed the WiFi router on the same table, next to the fish tank. And now he’s calling in because his WiFi signals are poor and he doesn’t have access to the Internet from all corners of the house. No, the fish aren’t the culprit. But the water is. WiFi signals are known to be obstructed by the reflection caused by water. So, it’s better not to have the WiFi router close to any container of water.

The home gateway is next to a window
We all love to sit by a window while working or just surfing the internet. It’s a nice way to be connected. But is the router there too? When the router is right beside a window, almost half of the WiFi signals are going out of the house. So half the signal is unused and out the window leaving the subscriber with just the remaining half. There’s obviously going to be poor performance in terms of WiFi connectivity. Moving the router away from the window will improve the WiFi signal.

It’s critical that you be able to determine if interference whether electromagnetic or gateway placement is the cause of slow internet complaints and to analyze the source of that interference in order to determine the best course of action. The right tools for analyzing interference can mean the difference between frustrated and satisfied subscribers (and technicians).