Tracking Down Ingress in Your Return Path

YOU ARE HERE:: Home / The Business of Broadband / Tracking Down Ingress in Your Return Path
Previous Next

Tracking Down Ingress in Your Return Path 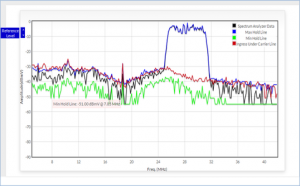 Every cable operator has a constant struggle with ingress. As external RF signals leak into the return path from various sources, that noise accumulates and funnels upstream to the CMTS. This cumulative effect can cause a significant impact on the quality of service for subscribers as it becomes harder and harder for the DOCSIS carrier to compete with noise on the plant.

One of the big challenges providers face is finding where ingress is entering the upstream plant. The most common tool used to combat ingress is a spectrum analyzer, which clearly shows when you have a noise problem. An analyzer is certainly helpful, but it doesn’t show you where the problem is. The usual method required to track down ingress in the return path is a trial and error process of disconnecting various segments of the plant to see the impact on noise levels on the spectrum analyzer. Besides being time consuming, this process is customer impacting each time a segment is disconnected. And, noise can be bursty, so by the time you get there it may be gone, only to appear later. It’s not a great way to troubleshoot noise, especially down to the subscriber level.

One of the things we do know is that 80% or more of the noise entering the cable plant comes in at the subscriber home or drop. This makes sense. It's where you have the least amount of control and ongoing maintenance, so it's where you will most likely have physical cable issues and loose connectors. While this bit of information narrows down likely sources of ingress, it also means a lot of potential places where noise could be leaking in. A connector on the back of a subscriber’s modem that is only a turn or two loose can be a significant ingress point. Add to that some noise from a home appliance, a radio and other sources of RF interference and the amount of ingress on the plant can quickly spike. Finding out which homes have loose connectors or other potential sources of ingress, and which ones are leaking in noise, is where the challenge lies.

Fortunately, there are new tools in the field already helping cable operators do just that. DOCSIS Proactive Network Maintenance (PNM) tools look at cable modem pre-equalization (Pre-EQ) levels to determine if there are upstream impairments in the plant like micro-reflections and group delay, and the approximate location of the problem. This can help you identify things like a bad connector, corroded center seizure screw, a squirrel chew, a bend in a cable, etc. This data is often used to target issues in the outside plant that could be customer impacting in the future. While this improves plant health and can avoid future outages, these hardline plant issues are not usually the major sources of ingress on the plant. 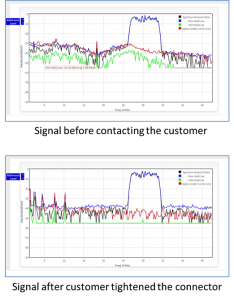 But, there is another really interesting thing that you can do with some PNM tools that will help you isolate ingress down to a customer’s home. Cable modems can adjust their transmit power, and one reason they do this is to compensate for a noisy upstream.  A PNM tool can take that transmit power data and correlate it with corresponding changes in the cable modem’s Pre-EQ coefficients. If there is a strong correlation between the fluctuation of upstream power levels and changes in the modems Pre-EQ data, then you can be pretty sure that you have a cable modem that is leaking in large amounts of noise. And, if that information is charted, you can see historically when those correlations occur. This solves the problem of tracking down something like impulse noise that is inherently intermittent.

So, rather than disconnecting half your plant to find a source of ingress, you can tell right from your office which subscriber homes should be looked at first to combat the problem. You might be able to clear up some problems with a simple call to the subscriber asking them to tighten the F-Connector on the back of their modem. Check out the screens on the right that one of our customers sent us. He had Upstream Analyzer pulled up on his laptop and was looking at a modem that he had identified as a source of ingress. He could see the elevated noise floor and ingress under the carrier. He called the customer and asked him to tighten the connector on his modem. After just a turn or two the Min Hold line dropped to the floor. To find out how he was able to identify which modem to look at, watch the video below. Every subscriber home where you can reduce ingress means your overall noise level on the plant lessens. This will mean better service for all subscribers on that upstream.