What is DOCSIS 10G

YOU ARE HERE:: Home / The Business of Broadband / What is DOCSIS 10G
Previous Next

What is DOCSIS 10G

At the Consumer Electronics Show in January of last year CableLabs announced their 10G initiative. The goal is to make changes in DOCSIS technology and cable plant architecture to allow for 10 Gbps transfer rates both downstream AND upstream, in addition to significantly lowering latency.

The 'G' in 10G stands for Gbps.  The choice of the name 10G was likely to one-up (or five-up) the 5G nomenclature. There has been a lot of buzz around 5G, which is the fifth generation of cellular service now rolling out across the globe. 5G definitely holds the promise of mobile service that is much faster with much lower-latency. Along with that buzz has been a lot of hype, and there have been questions about what 5G might mean for residential broadband use and whether it could be seen as a viable replacement for wired service to the home. For various reasons I don't expect that to happen in significant numbers anytime soon, as I wrote about here.

In order to counter the hype surrounding 5G, and to provide a vision for the future of DOCSIS technology, CableLabs has laid out a roadmap for what they are calling 10G.  Unlike 5G, where there are wholesale changes to antenna technology and the type of spectrum being used, 10G is really a combination of several different RF and fiber technology changes that almost seem to be cobbled together under the 10G name to achieve the desired results.  Fortunately, CableLabs is very good at standards and at staying on top of technology to squeeze every last bit of performance out of an HFC network.

A big part of 10G will be the new DOCSIS 4.0 standard. There are two aspects of that standard that will allow cable operators to increase the speeds they are offering.

Extended Spectrum DOCSIS (ESD)
As part of DOCSIS 4.0 CableLabs is also working on adding more spectrum. For some operators who do not have their plant ready to leverage Full Duplex, ESD is a way to increase speeds without having to make a lot of architecture changes. This will be increasing the available spectrum from 1.2GHz to 1.8GHz, and possibly to 3 GHz or higher in the future.

As I mentioned, one of the big advantages of 5G service is very low latency. Low latency is really important for certain applications, like gaming, as well as some technologies on the horizon like autonomous vehicles and telemedicine. The goal is to reduce latency to as low as 1 to 2 milliseconds for those applications that are latency-sensitive.

A lot of the groundwork for what will be needed for 10G was already laid with DOCSIS 3.1. One of the things that will be required for faster speeds and lower latency is less coax and more fiber-deep deployments in a node-plus-zero (N+0) architecture.   Service providers are already rolling out DAA using Remote PHY and Remote MAC/PHY to bring the delivery of the service closer to the subscriber.

In addition to going fiber-deep, CableLabs is working on a new fiber technology that will allow operators to double the capacity on their fiber runs without adding additional strands of fiber or more lasers. This will  be done using a full duplex coherent optical technology that will allow for the transfer of data in both directions at the same time on the same frequency.

While there will be less and less coax in the HFC cable plant of the future, the future still looks bright for DOCSIS broadband with 10G.

Want to know more about 10G?  Watch my Tech Tuesday broadcast on the topic. 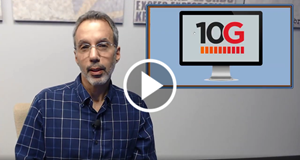