YOU ARE HERE:: Home / The Business of Broadband / Will 5G make wireline broadband obsolete?
Previous Next

The buzz in the broadband industry these days is 5G. That’s not G as in Gigabytes. That’s G as in Generation. 5G is the latest generation of cellular technology, and some say that it could replace the need for wired broadband connections in the future. Is that possible, and if so, how far in the future?

One reason people are thinking that 5G may replace wired broadband connections is because of the potential speeds being touted. One of the spectrum bands that 5G uses is millimeter wave (mmWave), which is the spectrum from 30 GHz to 300 GHz. This is also known as the Extremely High Frequency (EHF) band. This compares to 4G, which mostly occupies the low-band spectrum from 700 MHz to 2.6 GHz. 5G in comparison is much faster—ten to twenty times faster than 4G. That means multi-gigabit speeds, and theoretically up to 10 Gbps.

That sounds like an attractive option at first. Imagine getting that kind of speed in your home without any wires. You could have one internet account and use that service on the go and in your home, seamlessly transferring from mobile internet to home internet when you walk through the door. No more wires, and no more in-home WiFi network, right?

It’s not that simple. In the 5G world, it’s the mmWave spectrum that is getting the most attention because it is the biggest leap in speed. That’s because the smaller the wavelength, the more data that can be carried. But, as wavelength decreases, so does the distance the signal can travel. That is because the potential for signal loss also increases as the wavelength decreases. Signals in the mmWave spectrum are easily prone to distortion from trees, buildings, rain, and even humidity. In fact, with mmWave you need a clear line-of-site (LoS) between the transmitting and receiving antennas.

This means cellular operators are going to need a lot more cell stations to transmit 5G signals in that band. While those cell stations are small (literally called small cells), and can be mounted on 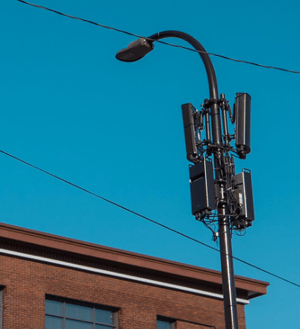 light poles, you will still need a short and clean shot to one of those cell stations to get a good signal. And, since 5G signals cannot pass through walls, home 5G service right now is deployed like a wired service—with a 5G antenna mounted on the outside of the home, and a wire run through the wall to the inside of the home. From there it is connected to a 5G router that transmits WiFi throughout the home. As you can see, you didn’t lose any wires, and you are still communicating on a home WiFi network inside.

Because of the number of cell stations needed, we will see deployments in the mmWave spectrum in urban areas first simply due to the density of the population. It is a great technology for outdoor public areas, and with a lot of small cells, there is a better chance at some success in offering service inside homes. New technologies in the works will also allow a 5G receiver mounted on a home’s window to communicate with another part of the receiver on the inside of the window. Of course, in most if not all urban areas there are already multiple options for high-speed internet via HFC and GPON networks.

In rural areas, where there may be less broadband options and lower speeds, there are  challenges in deploying mmWave because of the number of cell stations required to cover an area that has fewer customers per mile. This, along with the distance that mmWave signals can travel, and the topography they must traverse, means it will be a long time before mmWave 5G  is available outside of dense population areas.

This is one reason cellular operators are not just looking at mmWave for their 5G deployments. They are also going to be using low-band spectrum in the 600 to 900 MHz range, and mid-band spectrum in the 2.5GHz to 4.2GHz range (also called sub-6 because it’s below 6 GHz). 5G delivered in these bands require fewer cell stations because the signal will travel farther and is less affected by obstacles. The mid-band is a good compromise between speed and coverage, and will still be able to penetrate some walls. So, you could get a mid-band 5G service inside your home without any wires or WiFi (assuming you have all 5G-compatible devices). It will be faster than our current 4G technology, but not be nearly as fast or low latency as mmWave.

For the reasons mentioned above I don’t expect 5G to significantly displace wireline broadband connections in the home any time soon, especially outside of urban areas. People need a reason to switch broadband providers. If someone has a sufficiently fast broadband connection via cable modem or fiber-to-the-home, why would they switch? It probably won't be because of speed or increased convenience, since the highest speed offering can't penetrate walls. Price could be a factor. Mobile operators might offer in-home 5G service with a small premium on top of their mobile service package.  And, poor quality of service and support might be another reason someone might switch providers.

So, it is incumbent on the incumbent wireline provider to make sure they are offering a quality service at a competitive price, with a high level of customer service and support, if they want to avoid losing customers to a 5G service provider in their area. Of course, that should be the case regardless of who the competition is.

To learn a little more about 5G, watch my Tech Tuesday broadcast  Evolution of Cellular: 5G and What it's All About.